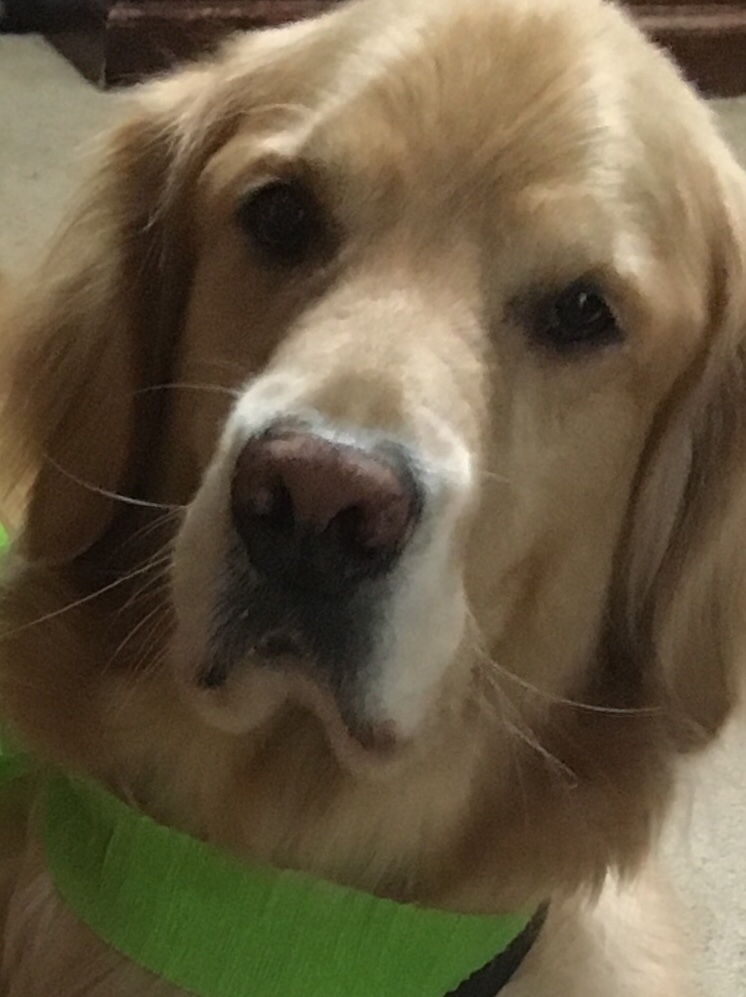 Let me introduce my Golden boy Leo. Leo is a five-year-old Golden Retriever. He is a beauty with golden-brown eyes and a creamy coat. He loves to be scratched and petted as most dogs do. Ah, handsome Leo. But if you meet him, you will understand why we call him the problem child, the juvenile delinquent of the family, and sometimes, a few names that can’t be repeated here. I have had dogs my whole life, and I do realize part of the problem is me. We’ve turned into pet parents that spoil the canine kids. Our Golden boys are the sons we never had. Did I mention we are empty nesters?

We have another Golden, nearly 7-year-old caramel delite Oliver. Oliver is the big brother who can do no wrong, at least that’s what our memory tells us. Though he did a decent job of teaching his sibling, he failed in a few areas.

Leo has several issues: he can be an anxious dog at times. He has food intolerances. He likes to grab your sleeve when you come in the door and won’t let go. He also likes to grab remote controls, cell phones, designer sunglasses, regular sunglasses, socks, undies (his or hers,) washcloths and towels. He holds these items in a clenched teeth death grip and one must pry the now slime covered object out of his mouth. He also loves to fetch the ball but won’t release it. Prying ball out of mouth: same slimey action. The larger size squeaky tennis ball is truly is his favorite game.

One of his favorite things is to look out the large picture window in the living room and watch for people, and animals: deer, turkeys, squirrels, chipmunks, birds etc. We live in the woods and wildlife is abundant. He also likes to fiercely bark at the woodland creatures.

Leo had different socialization as a puppy -different from Oliver. I did wrong when I assumed they would be the same Golden boy, only different colors. Leo also missed out on a lot of puppy socialization that Oliver received from his breeder and we continued. Believe me, it matters. It really makes a huge difference in their behaviors and yes, I do understand that some of it is a personality difference.

One thing that Leo hates more than anything is having his nails trimmed. Hates. Now I am not sure when it exacerbated to the degree that it became such a serious problem, but I can explain part of it.

It is a difficult problem to have, though from what I read, not uncommon. Nail length is important to health.

One reason for our problem: I rarely trimmed his nails as a wee puppy as religiously as I should have. So it turned into a challenge, but still, we got it done.

Let me tell you, Leo is an elephant and he never forgets. The experience that changed everything for us went as follows:

It was a trip to a vet who knew I wanted him sedated to make the job easier but the veterinarian wanted to try it without the use of sedatives. So, we wrestled him and hog-tied him with our arms and weight. It took 3 people, two to hold him down and one to trim his nails one at a time. Each nail was a struggle and he hated being held down. He even took a distraught nip at one of the helpers. I still feel guilty that I didn’t have enough presence of mind to call a halt and say STOP.

And though I have guilt now, bad dog mom, I paid for this ignorance later. Later came when soon afterward, we had to get Leo into the car to take him and his brother to the boarding farm.

Did I mention that Leo never forgets? There was no way he was getting into that car, let me tell you. Caught unawares by his behavior, I tripped over a landscape timber and pulled a hamstring. It was so bad I couldn’t walk straight for several days. Man, that hurt. It also happened to be a family wedding weekend, hence the visit to the boarding kennel. It took several drinks and some anti-inflammatory meds to dance that weekend, let me tell you.

After that episode, I had to retrain Leo with treats and lots of love to get back into the car. I promised him we would not go to the vet’s mobile van to be hogtied again. A few treat-filled sessions, and Leo soon happily jumped in and out of the car.

Before this episode and after it, I tried training. Give me your paw. Let me hold your paw. Used a clicker. Used steak and beef and cheese and treats. Worked on holding his paws, holding the clippers, clicking noise with my tongue like the clipper would make, brushing the paw, holding the paw, playing with his feet. All to no avail. One time my daughter and I worked with him for an hour to trim one nail. I didn’t want to traumatize him again either, and worked on my patience and worked to stay calm.

Meanwhile, we visited a new vet. The previous one was a mobile vet and I knew we weren’t getting back in that van, let me tell you. After I explained his nail-clipping problem to the new vet tech, he said, “Oh, let me take him to the back room. Sometimes, they are just not well behaved for their owners.”

Did I say “No way, do it here, I know it won’t work?” No, I let him take Leo, my troubled anxious dog to the back and try to clip his nails.

After many nail-biting tense minutes, he returned. He was perspiring and slightly red-faced. “We couldn’t do it,” he said. “He was pretty upset.” When the vet came in, he said Leo traumatized the tech. I asked if he bit and was told no, but Leo now has a huge black mark on his permanent record. Whenever I bring him in for shots, etc. suddenly we are surrounded by techs with worried looks on their faces. We had a hard time drawing blood for his heartworm test after that, too.

Mind you, this is a Golden Retriever who loves everyone and will crawl on your lap like a puppy every chance he gets (and every time he is allowed.) Poor Leo. You would think I would have learned the first time. I’m sure that experience, a new place, a new vet, new people, a crowded back room of dogs and vets and cats and lord knows what else did nothing to help our situation. I admit that I am ashamed of these two incidents where I didn’t advocate for my canine kid, but I share it as a learning experience for others.

In the interim, I’m worrying. I know long nails are unhealthy for the dog. And dog paws that paw and scratch are unhealthy for the human. We walked on pavement and worked on nails and paw holding and stroking and clicking and treating. All too little results. I also consulted trainers, (paw click treat) you-tube videos, training blogs and more. I read and studied and read. Until…

Leo loves food. I know I am lucky about this. All my dogs have been treat/food motivated. I find it so odd when I hear a dog friend say that their dog is not food motivated. I wonder how they you teach them tricks, but, whatever, right?

So, Leo loves his treats AND of course, loves his MEALS. One day, while he was eating breakfast, I used the opportunity to cut a mat out from his hind leg area. And then it hit me. At mealtime, food is all Leo cares about.

During dinner that night, (and a yummy one it was, kibble and bone broth and beef chunk topper, oh my) I grabbed the nail trimmers and gently picked up one of Leo’s hind paws. Clip. Done. One nail done.

ONE NAIL CLIPPED WITHOUT TEARS (mine) and anxiety (his.)

Since he has a slow feeder bowl, and was still eating, I gently grasped one of Leo’s front paws. He turned his head to look at me and went back to his bowl. CLIP! I trimmed another nail!

IT WAS A MIRACLE! Although he loved treats, he didn’t want his paws touched or handled no matter how many treats you offered. But a WHOLE BOWL of delicious food, that was another story.

Now, every other day, while Leo eats, I trim a nail or two or three. And he is content to eat his meal while I do this. And over a period of time, our naughty needy Golden boy gets his nails trimmed! After hours of clicker training and de-sensitivity training and research, and how-to videos and wrestling and pleading and begging, I discovered the perfect answer to our problem. Good dog Leo. Good owner me.